Paula’s naked form lounged across the ground in languid, feline posture, arms folded behind her as her partner boasted about his kill for the millionth time that evening. The thick canopy above them concealed the moon from view, so she stared into the void. Thick, humid air surrounded her, smelling of smoke and snake meat. The meat had barely been enough to fill her, and it certainly had been nothing to brag about. A horrid taste lingered on her tongue, an unpleasant flavor she’d rather never have to deal with again. Still, Ian rambled for over an hour about his use of a hand-carved spear to take down the tiny reptile. It hadn’t even been venomous. She’d hunted far more fantastic beasts than that, and she’d had more respect for her kills. Ian wore the snake’s skin around his neck like some sort of trophy.

Why had she ever thought that competing on Naked and Afraid was a good idea?

“You know, you really need to carry your weight,” Ian said. “I’m out there, building shelters, getting our meat. What do you do? Play with plants all day?”

Plants did little to stem her appetite. The meat had helped—that much she could admit. Cravings remained, however. She wanted to sink her teeth in some real meat, rip it apart, bloody and—

Her hands curled into fists.

“I’ve brought plenty of food back to camp,” Paula said. “Mushrooms, berries. It’s not much, but we would’ve gone hungry the first few days without my knowledge of this area.”

“Swear those berries gave me a headache,” he said. “You sure you know what you’re doing?”

“All you did was kill a harmless snake.”

“How do you know it was harmless? You’re a botanist, not a reptile scientist.”

Ian’s eyes narrowed at her. There was a flare of danger behind those eyes, one she’d noticed when they first shook hands—his grip just a bit too tight, his smile just a tad too wide. The smell of Axe body spray had choked her, but her pulse remained steady, calm. She was no one’s prey. Not then, and certainly not now. Ian turned the spear over in his hands. He glanced at the sharp tip, then at the tender flesh of her exposed abdomen. The corner of his mouth twisted into a sneer.

“The cameramen can be here in twenty minutes,” she said. “If that.”

“What do you think I could do to you in that time?” Ian asked.

“Are you threatening me?” Paula asked.

A rustling in the forest disturbed them into silence. Paula stared into the darkness of the jungle, her keen eyes catching sight of the beast within.

“Here’s your chance,” she said. “Kill that beast, and prove you’re a real man.”

Ian’s features paled as the creature sauntered into the clearing. His words into the radio were rushed, but not fast enough. Two hundred pounds of muscle launched at him, knocking him to the ground. White teeth flashed in the light of the campfire.

Paula appeared over the beast. Her hand touched its back, and it turned its head toward her with a snarl.

The feline stepped into the light, its spots like black, warped smiles. It roared, but Paula didn’t move. After a moment, it returned to the jungle.

Ian lay on the ground, reeking of piss. His entire body shook.

“What the hell was that?” he asked.

Paula’s eyes flashed in the flickering light. Tawny, spotted fur sprouted on her face and arms as she bared her sharp teeth. Her claws gripped Ian.

“It recognized who the apex predator was.”

She roared in time with Ian’s screams. 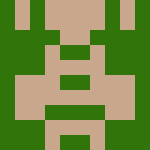 Keily Blair holds a BA in English: Creative Writing from UT Chattanooga, where their nonfiction won the Creative Nonfiction Award. Their fiction has appeared in magazines and anthologies such as The Dread Machine, Trembling With Fear, Good Southern Witches, and is upcoming in Dream of Shadows, Cosmic Horror Monthly, and others. They are currently at work on a fantasy novel. You can find more details about their work at www.keilyblair.com. They live in Chattanooga, TN with their husband, dog, cat, and four guinea pigs.

Read more from this Mechanist.

The more followers you have, the more important you are.

After her mother’s suicide, lonely Melody returns home to fetch the family orchid; a plant capable of altering reality—for a price.

An Exercise in Peddling Fear

A true master of a trade takes pride in their work and the demonic plying of human fear is no different! An artisan breaks down the industry and walks two unfortunate souls through its current project.

While spending the night in the Amazon on Naked and Afraid, Paula must face the true apex predator of the jungle.

A woman awakens to find life strangely normal after murdering her husband, but normal is a world of constant dread, and the voice in her head is worse than the corpse in her bed.