“Hey, doll. Smile.” The man who’d just arrived leered at the lone woman from his perch at the opposite end of the bar.

I sighed and rolled my eyes. Typical.

Pointedly approaching the young woman, I asked her, “Need anything?”

Her shoulders relaxed as she gave me a slight smile. “I might need a cab.”

“Sure thing.” I handed her a bottled water from under the bar. “That’s on the house. Head outside in about five minutes and look for a blue cab. I’ll make sure he doesn’t follow.”

Back at the other end of the bar, I fixed the leering man with a flat expression. “What’s your poison?”

Of course it was.

“You know that girl down there?” he asked as I half-stepped away to make his drink.

“Whatever, you know her?”

I let my gaze slide back toward her, then back to him. “We’ve met.”

“Why’s she so unfriendly, then?”

“She just brushed me off when I told her to smile.”

I held my expression placid, not scoffing at him or rolling my eyes. “Maybe you didn’t give her anything to smile about.”

He bristled at that. “You saying I’m not good enough?”

“No, I’m saying telling someone to smile is rarely effective. Why not tell a joke or pay them a genuine compliment without thinking about what you’re going to get in exchange?” I handed him his vodka tonic.

He sipped his drink, arching an eyebrow over the rim. When he set the drink down, he shook his head. “Works on plenty of other people, just telling them to smile.”

“Not on everyone, though. For example, if you tell me to smile, I won’t.”

That brought a smirk to his lips. “Oh? Hey, doll. Smile,” he said, echoing his earlier comment to the young woman.

I stood in front of him and stared at him, my face unmoving. I didn’t turn my head to watch the young woman at the end of the bar leave. I hadn’t called her a cab in the usual manner, but a cab had pulled up outside regardless, driven by one of my sisters. She was safe from this creep now.

Which meant it was time for me to make sure he wouldn’t be bothering any other women, here or elsewhere.

I shook my head.

“Something real. Something that actually inspires me to smile.”

“Uh, how about that weather we’ve been having?”

He was going to make this tedious. I could play along. “It is, in fact, weather.”

“Sports? Our team rules, the other teams suck?”

Flicking my gaze toward a TV, where our local team was currently losing, I said, “I find that to be accurate some of the time.”

“Okay, you know what? You’re just a hard nut to crack. You’ve got like…mega resting bi—” He let himself trail off. “Uh, you know. Perma-scowl, or whatever.”

“Oh, I assure you, that’s not true.” I held up my phone, the lock screen of which showed me beaming from ear to ear. Selfie mode didn’t really do my smile any justice, in my opinion, but it seemed to satisfy him.

“Damn, you’re so much prettier when you smile,” he said.

“Mmm, if you say so. But that’s still too self-serving to get me to smile.”

He chugged the rest of his drink and slammed the glass back down on the bar. “You know what, I don’t even care.” He fumbled his wallet out and dropped a 1,000-yen note on the bartop. “Keep the damn change.”

“Big spender,” I murmured, sweeping it up.

He chuckled. “Yeah, that’s how to get a girl like you to smile. Tipping.”

He could have left my bar, and this whole affair could have ended quietly. But I was tired of him, tired of men like him, and tired of toying with him.

I flipped my hair back over my shoulder and gave him the sultry smile he’d been asking for.

He chuckled again and smiled back.

“Ever heard of a hari onago?” I murmured.

“Guess not.” I lashed out toward him with my hair, the tiny barbs at the end of each strand grasping his flesh and yanking him toward me.

He screamed, then. It didn’t last long, as I directed one of the hooks across his throat to sever his vocal cords. Too much noise tended to draw attention.

“Hari onago. You told me to smile. I did. You smiled back. Now, you die.” I shrugged. I knew he was beyond caring about my explanation or anything else; still, I liked to tell my prey where they’d gone wrong. In the unlikely possibility of a shared consciousness among those who believed women owed them anything, it might serve as a future warning.

“My hair has a mind of its own, I’m afraid,” I murmured as the barbs continued to lash his skin, dislodging larger and larger chunks of flesh that fell around my feet.

I’d have to clean it up before my regulars came back in from their sudden, well-timed departure for the back patio. They’d seen what had happened with obnoxious men in my bar before. They knew how to behave and when to make themselves scarce.

They also knew that, when all was said and done, and their stoic bartender was sated, drinks would be on the house for a couple of rounds.

And none of them would ever ask me to smile. 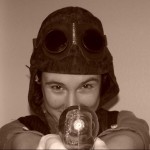 Dawn Vogel's academic background is in history, so it's not surprising that much of her fiction is set in earlier times. By day, she edits reports for historians and archaeologists. In her alleged spare time, she runs a craft business, co-runs a small press, and tries to find time for writing. Her steampunk adventure series, Brass and Glass, is available from DefCon One Publishing. She is a member of Broad Universe, SFWA, and Codex Writers. She lives in Seattle with her husband, author Jeremy Zimmerman, and their herd of cats. Visit her at http://historythatneverwas.com.

When climate change brings about the New Ice Age, along with the hatching of a hoard of monstrous Ningen, it is down to the five remaining members of the Polaris military base to lure the monsters to their doom. Only, the theory behind the lure isn’t all that sound. And the Ningen are like nothing they have ever faced before.

As it is so short, I would prefer to have the story speak for itself. Thank you for your consideration.

Her Attraction, When Invisible

Brian, a lifelong insomniac, thinks he’s almost moved past the death of his wife. However, the Horrors that live in his house and torment him at night tell a different story.

The poem depicts the plight of Medieval villagers who have fallen prey to witches. They visited the hamlet guised as damsels and allured them into consuming the mangoes they had brought as an offering. The rural settlers were unaware of the fact that while they were enjoying this new delicacy, their beating hearts were growing as crops in the witches’ lair.

We take shelter next to a low shelf of rock and watch the sun die a slow death on the horizon; an angry red eye drowned in a blaze of orange and yellow. Beneath it, the ocean is flat. A rippling, endless mirror, all of it one terrible display of beauty waiting to devour us like it did Hannah.