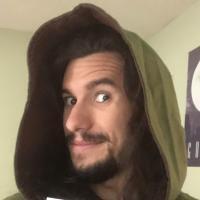 Sean Mabry is a long-haired cryptid wandering the eastern edge of Los Angeles County. He is equally passionate about fiction and marketing, since both are important tools in his quest to unravel civilization. In its place, he anticipates something weirder, wilder, and kinder. His short stories have appeared in Lamplight, the Weird and Whatnot and elsewhere. His work has also won two Honorable Mentions and a Semi-Finalist award in the Writers of the Future Contest. Though he is generally considered docile, experts advise keeping avocado toast on hand in case Sean Mabry needs to be pacified. He is, after all, a millennial. Here are his links in descending order of professionalism: LinkedIn: https://www.linkedin.com/notifications/ Facebook: https://www.facebook.com/ Official Website: http://www.seanmabry.com/

The love of Lola’s life, Terrence, was born blind. Thankfully, he has TruSight, prosthetic eyes that allow him to see. He prefers to keep the EaseFilter on, though, enhancing his surroundings—and Lola—by making everything look a bit better. “No Filter” is a story about love, perception, and self-acceptance.

Join our email newsletter and be among the first to learn about the cool stuff we do and the awesome stories we publish. Thank you so much for your support!

Join today for $25/year. We publish two stories each week.